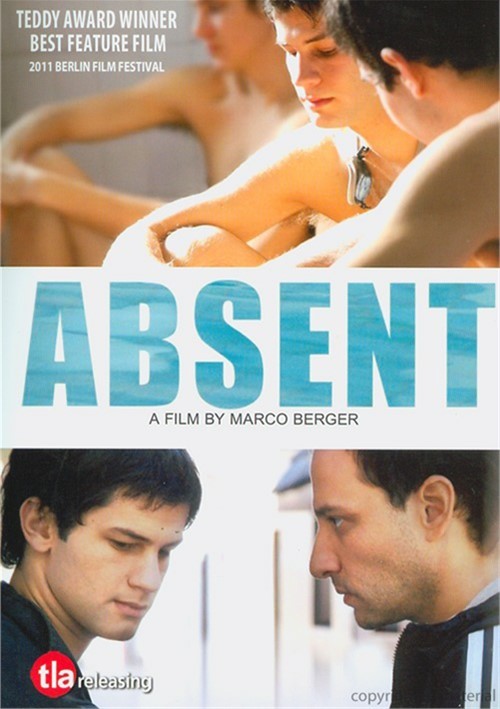 In Stock
In Stock: Ships Immediately
Product is In Stock at our warehouse, ready for immediate shipment if ordered before 3pm ET.
Free Shipping
Free Shipping
Orders of $75.00 or more will be shipped our Standard Shipping option and the shipping is completely FREE. Learn more >

Stream for Life
Stream Only

By: Raymond Murray
In-House Review - Nov 12 2014
Fresh from his fascinating - if controversial - 2009 debut film, Plan B, Argentinian filmmaker Marco Berger continues his focus on hitherto heterosexual men who develop feelings for other men.

Faking an injury, Martin eventually tricks his teacher into letting him spend the night at his apartment. As Sebastian begins to realize the possible sexual interest on the part of his student, he is conflicted. He is dismissive, but his curiosity is piqued by the boy's overt advances. An extraordinary event soon f-rces the increasingly troubled Sebastian to question his own feelings for young Martin.

Absent is not a simple boy-meets-boy drama. It's a taut, and at times, incredible sexy drama of repressed passion, guilt and regret. There are no easy answers in this edgy sexual thriller that won the Teddy Award for Best Feature Film at the 2011 Berlin Film Festival.

Review by just a reviewer

By: just a reviewer
.....Latest Work is so very much the opposite (well, perhaps there's a "tinge" of romantic love). Instead, we're being given: A Crush-love...almost a Stalkerish-love.

In a comparison, "Absent" is the more... Read More
.....Latest Work is so very much the opposite (well, perhaps there's a "tinge" of romantic love). Instead, we're being given: A Crush-love...almost a Stalkerish-love.

In a comparison, "Absent" is the more accomplished production....both in camera work and locations-wise. And as in the earlier film, here the Co-leads and supporting actors also cannot be faulted. Javier De Pietro, as Gay-aware, swim team student Martin Blanco, delivers an admirable first film performance as a mid-teens young man, who is "crushing" on his team coach. Martin has a "Plan" (but...unlike in Director Berger's preceding film, no alternative, Plan B has even been thought of). Single-minded and intensely focused, our Martin has set his sights on placing himself in his team coach's very own bed. Next up, as our unsuspecting object of affection (I mean, obsession), we have the attractive, student-oriented Coach Sebastian Armas (Carlos Echevarria, an experienced actor of some 12 films). This film star ably paints a picture for us of a serious and never smiling, heterosexual(?) man, who is much concerned for those under his charge.....and possessing no(?) interest in the Gay lifestyle.

- The opening-credits camera shots, and especially the soundtrack, seem meant to be ominous in nature and apparently have been structured to forewarn where this film is heading. They consist of lingering, closeup angles of young Martin's striking and sexily hairy body. All this in the guise of a sports program physical exam (oh, of course). Continuing this fascination with Martin's body....later on, after our young trainee has manipulated his way into his coach's home, various intentionally provocative poses of Martin, in near undress, are provided by our Director....culminating in an early morning, "touchy-feely" visit to Sebastian's bed, as he lies sl--ping.

- We are given long, sometimes static, film minutes (more than one-tenth film's running time) spent in an automobile front seat. Our Co-leads driving from place to place, as required by the storyline. These are uncomfortable (yet probably realistic) times spent together...with little dialog. Similarly, there are MANY other coach/trainee interactions where one might expect easy chatter/conversation. BUT such does not occur....and that is not what I would expect to happen between a dedicated coach and those he is mentoring (but perhaps such is not always the case in countries outside the U.S.).

- Young Martin appears not to interact with swimteam mates in a normal, youthful, fun manner...and is shown to roam pool changing rooms, in the hopes of seeing other young men in stages of undress.

- After the unsuccessful attempts to get closer to Sebastian during that night spent at the Coach's home, and perhaps ashamed of his actions there, Martin quickly owns up. He does so in a note left for Sebastian, reading that he had contrived the overnight stay (but he does not specifically spell out what his aim had been). From that point, Martin begins distancing himself, even missing training sessions. Then occurs an uncomfortable scene in which Coach and his girlfriend (yes, he has one) take seats in a cinema, unaware that Martin and a young female acquaintance are already seated there. One seat separating the 2 men, (as the Director has planned for), we suspensefully wait for awareness of each other to hit the fan.

- Somewhat later, their relationship climaxes (yes, I use that word) in a face to face confrontation: Martin openly admits to his plan for a "hoped-for seduction".....And Sebastian, realizing the untenable position in which he had been placed, directs a blow to Martin's face, and angry words are exchanged.

We will never know this film's "What Might Have Been". Perhaps even Director Marco Berger cannot know. BUT....in the story's closing 20 minutes, we find ourselves being carried along, as if within Sebastian's innermost mind, seeing him live each day--though he is acting as in a near-trance. Then, startlingly, we begin experiencing "What Might Have Been" memories of his past times spent with Martin (but happening as Sebastian wishes they "might" have occurred). Closing shots take place with the Coach revisiting the darkened and ghostly poolhouse. Then follows a final scene of our Co-leads (yes, both) seeking and finding one another in the semi-darkness: ....a Sweet Kiss....an Admission of Regret....a Request for Forgiveness. And we see, for the very first time in this unhappy film, a tender smile appear on the face of Sebastian.