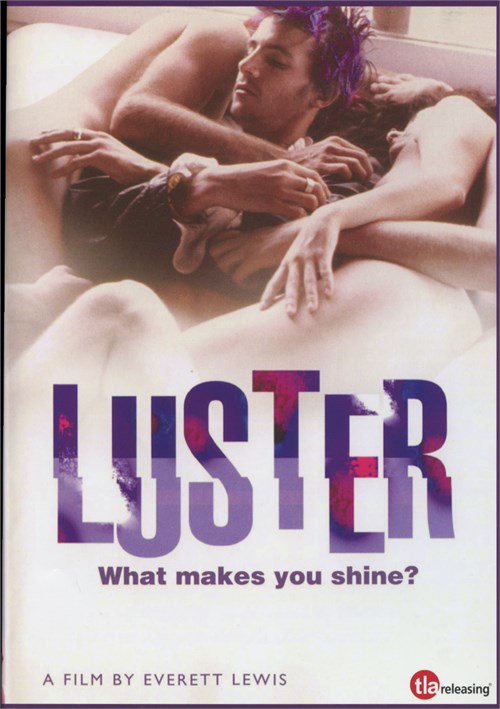 N/A
Not Available on DVD
Notify Me

Stream for Life
Stream Only

Luster is On Sale

See Other Titles From This Sale

Queercore-loving Jackson (Justin Herwick) is a lanky, blue-haired record store employee and poet who wakes up one post-or... Read More
Luster is a hip, irreverent and refreshingly funny take on today's queerboy world of lust, sex and unrequited love.

So where is a hot, young gay boy who wants to be in love to turn? There's his hunky cousin Jed (B. Wyatt), who is visiting, and while lustful dreams invade his mind, there's that damn incest thing. He could always have Derek (Sean Thibodeau), a clean-cut customer who obviously likes him, but that might be too vanilla. His best bud and boss, Sam (Shane Powers), might not be so straight after all ? but that's a little intense. With raging hormones and a confused sense of romanticism, the skate-boarding Jackson finds that getting fucked while in love (with the one who's fucking you) is not such a simple matter!

Set in a seemingly all-queer L.A., Luster is a wildly entertaining ride through clashing worlds of the heart and libido.

In addition to the bizarre plot twists, you'll get to see the gorgeous B Wyatt showing off his body for a great part of the film. The trailer gives an idea of the look of the film, but doesn't really represent it's unique feel.

One correction to the review on TLA's Product Info tab: Willie Garson plays a seriously SADISTIC musician. I'd gladly give this film 4 stars, if only I could figure out how to assign ratings on this site!

The story centers around a punky, skateboard, party goer, poet, named Jackson (Justin Herwick), who works at a record shop called, how appropriate, "No Life". After waking up from the aftermath of an orgy he inquires about a boy who was there, Billy (Jonah Blechman) with whom he develops an infatuation for and decides to track down. Who wouldn't! He's a cutey but he he too has some flaws. Needless to say Billy is the boy toy of a record mogel played by Willie Garson (Sarah Jessica Parker's gay friend Stanford on Sex and the City) who gets off on getting beat up. It does get a bit ugly and some people might not like the S&M. Throw in Jackson's hunky cousin Jed(Barry Wyatt), a clean cut collegiate type customer at the store (Sean Thibodeau) who's in love with Jackson, a lesbian friend named Alyssa (Pamela Gidley) who screws around with Jed and is later found out by her lover, and you get a smorgasboard of a soap opera. The one character I really wish had been more developed and with whom I felt something towards was Jackson's supposedly straight boss and friend at the record shop, Sam (Shane Powers). He gives a real emotional performance at the end and his story only scratched the surface. The other performances are hit and miss. Sometimes they're great and then at other times it seems campy and silly. It's a real mixed bag along with the storylines. Take it for what it's worth though and you'll have fun with these characters, their loves, lusts, and losses.

The DVD is stereo and the transfer is a bit grainy but it only adds to the seediness of the tale. I didn't expect much more from a low budget "indie" and it also includes a short documentary with the director and a film commentary and trailers for other TLA releases.
4.00 out of 5