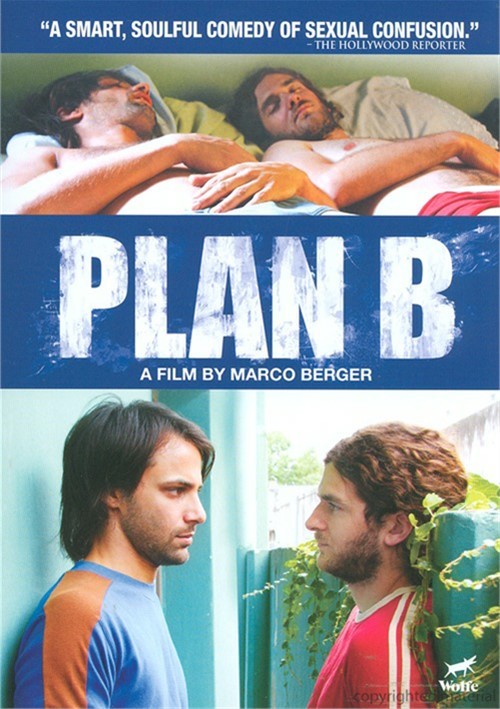 N/A
Not Available on DVD
Notify Me

Plan B, a decidedly different kind of sexual comedy-a straight guy plots to make his ex-girlfriend jealous by trying to seduce her new boyfriend. Complications arise.

7 Reviews for Plan B

Review by Romantic at heart

By: latin boy
The movie had a great idea but the execution was terrible.The movie was tooo slow for my taste. Also they really need a good film editor. Besides that the movie was not that bad.
2.00 out of 5

Review by just a reviewer

Yo.....let me get something out of the way right up front. If you don't think the ending 4 minute scene makes your viewing time more than worth it, then I'll eat my ticket stub, AND tell you that you're not the gay romantic you'd like to think you are.

Yes, there are things wrong with this film, but most of them have to do with a lack of resources to produce anywhere near a top-grade production. This young and talented (cute, too) writer/director likely did the best he could with what he had. A lack of inviting surroundings in which to shoot---particularly an important, waterfront "getting to know one another" scene which takes place in an abandoned industrial area of crumbling cement, rusting metal and weed growth is one example. And, sadly, it undermines the relationship development such a scene is aiming for. Still, it does remind us that our 2 lead characters are not of the upscale, penthouse-swinging type---and their living quarters reflect that.

Speaking of leads (Manuel Vignau and Lucas Ferraro).....if you begin thinking these 2 are mere eye candy, they'll have you right where they want you---squirming for "It" to happen. What's "It" you ask? Well, c'mon, be honest; you went into this thing thinking, "Oooh, 2 straights falling for each other." Sure ya did....but you know, seeing good things happen often takes patience---and our leads and director are quite good at making us wonder "if" as well as "when" "It" might occur. Yeah, and during all the hanging on you'll be doing, you may just start to notice that these guys play off each other wonderfully---which is no small thing if a film is to be memorable. (This being a low budget Indy, the DVD Special Features interviews of both actors, perhaps surprisingly, show them to be quite well-spoken and certainly well aware of what they needed to do to get the point of this story across to us).

Moving to the end here, let me say you'll just have to stick around to see how the big "Plan B" of this film's title works out (clue: "Retard," I gave you an earlier hint in this review). (And see, right there's yet another clue---from a line in the film, itself). As a closing comment on the overall production, I'll just say: maybe not the most original concept and polished execution....but on the whole, Satisfying.

PS--Yes, there is a moral to this tale. It's easy....If you're gonna fall, expect to fall hard!